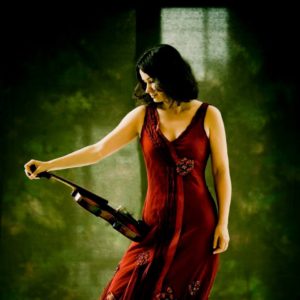 Not all classical concert-goers appreciate the bar scene. I understand about it not being for everyone, but diet-coke or lemoned-H2O can still work if there is a reason to go, and last night in Salt Lake City, there was. I was up front for Thierry Fischer and Patricia Kopatchinskaja doing MOTUS After Dark at SKY. We had Mercedes Smith on flute, Madeline Adkins on violin, and Jason Hardink on piano, each with wildly virtuosic pieces riveting the audience, and then the tour-de-force: Schoenberg’s Pierrot Lunaire, conducted by Fischer and sung by Kopatchinskaja.

If you haven’t heard it, you should.

Kopatchinskaja’s facial acting, even during her violin solo, may well be helpful to internet generations more visually oriented than their elders. I’ll wager it bridges them into hearing and feeling the compositions in ways they might not otherwise.

The whole production was wonderfully effective, taking what this millennial party center has to offer in terms of visual facilities, social setup and patron-type, and using them to maximum effect to present classical music in an alternative setting. No, it wasn’t a hush-hush concert hall so I didn’t get every nuance, but I did to enjoy the fact that the audience and their needs became a part of the production, and that I could hear the music within a social context, which added fullness and depth in a novel way.
copyright 2017, All rights reserved.

2 thoughts on “Bar Music for Millennials (and their Grandmas)”

This site uses Akismet to reduce spam. Learn how your comment data is processed.