Does learning violin take hard work? As a simplification, yes. More than that:

Not a lot about studying violin frustrates me. I could think of only three things. Mostly, I can’t do anything about them, except introspect, and keep plugging away.

I get frustrated by life interfering with practice time. When a flat tire 200-miles from home wipes out Saturday’s practice, solving the tire problem wipes out Sunday’s practice, a car oil leak wipes out Monday’s practice, a sick relative wipes Tuesday’s practice, a last-minute trip to the doctor wipes Wednesday’s practice, and all I am left with is Thursday and Friday to prepare for Friday’s lesson, this is frustrating. I think of the child whose path is cleared for practice every day, and oh how I wish someone would do this for me. Oh well! It is the adult responsibilities of life that interfere with adult learners’ progress.

I get frustrated by my own failure to trust the process of practice. I have a tendency to over-focus and work beyond the daily crest of improvement; to grind my way down the path of deterioration, deaf to consequences. I forget to stop on the upswing, allowing 10 repetitions to be enough. The body and mind need a night’s rest to assimilate the day’s work and create a launch pad for the next practice. It’s a personality trait that violin demands I address.

Occasionally, I get frustrated by slow progress. I know of some who learn rapidly, and feel tinges of jealousy. Not that I can do anything about this. We are each blessed with unique characteristics that provide each with unique strengths and weaknesses. As much as I might wish otherwise, my neural-makeup is slow to change and grow, particularly regarding fingers that continually trip-up and sight-reading that continually stalls-out. I can only count my blessings that, with effort, and one synapse at a time, it does evolve, if I just keep plugging away.
Copyright 2017, All rights reserved. 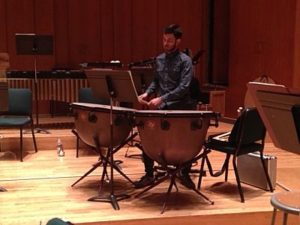 Inadequacy. A horrible feeling. Yet I embrace it, in my violin life at least. When I feel good about my practice and playing, I get complacent and progress ceases. When I feel inadequate, that my sound and music could better express what I have to convey, then I look deeper and try harder to improve my technique, developing physical ability that connects to inner musical ideas. It’s a difficult road and a long slog.

Luckily, inadequacy is accompanied by joy. Every step forward, however miniscule, is a step closer to that elusive goal. I pair these feelings, allowing inadequacy to propel me forward in my daily work, allowing joy to celebrate accomplishment, but wallowing in neither. Getting lost either in self-pity or in self-congratulations are death to the violinist, in that the emotional self-indulgence distracts from the labor of forward momentum.

If I could describe my inner neurology, I would catalogue the insufficient neural connection between my sight and hearing to my left hand. I can read and hear melody, however my left hand is ever-so-slow to finger the idea and stumbles piteously along the way. When my left hand is getting a melody, it commandeers all available neurons such that my bow-arm lacks guidance and sound quality deteriorates to crunch, crunch. The good news is that the more I diligently and thoughtfully practice, the more the more connected and coordinated my left hand becomes, freeing neurons to direct my right arm to produce beautiful tone and expressive sound.

The better news is that is that advances in the neurological sciences detail how the adult brain is far more plastic and open to growth than previously believed. We are so used to, and so taken with, the easy growth and advancement that accompanies childhood learning, that adult learning tends to get discounted. What I am discovering is that adult learning happens in a different way than childhood learning, but that it does happen. This idea serves as a foundation for aspirational goals that I cling to, worshiping at the alter of mastering skill through developing my inner neurology. One dendrite, one synapse at a time.
Copyright 2017, all rights reserved. 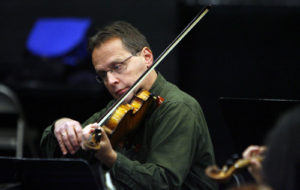 It is with David that I fell in love. With my violin. He was my first teacher. At our first lesson he asked what experience I had with the instrument. “I learned to play ‘Twinkle twinkle little star’ once,” I replied. “Great! I’d love to hear it.” Ensued a caterwauling only you can imagine. “That was lovely!” David declared, “Here, let me show you another way to hold the violin.” Thus began our five years work together.

David was always patient and always kind. Little by little we worked our way through Suzuki books 1, 2 and 3. “A little higher on 3rd finger D.” “Open up your bow arm. Let it relax at the elbow.” He taught my ears to hear pitch. He loosened up stiff joints. He accompanied me in recitals when I wanted to freak out and run away. David kept me at it, and he let me love the sound I that produced, regardless of what I produced.

First teachers are like this. They tolerate quick learners and awkward learners, ones with incessant questions, those prone to exploring off base, guiding gently back to proper technique and musical expression. They introduce us to our instruments and to music, opening a door for inner voice to shine. They play an outsized role in our lives, influencing musical development and life to come. They forever hold a place in our hearts. 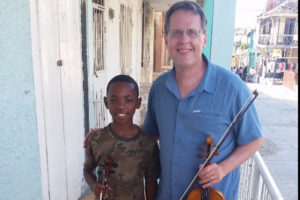 Do you have a David Langr in your life? With whom did you fall in love with your violin? Or your oboe, or your snare drum, or whichever instrument you play. See the comments? Let the world know how wonderful is this teacher of yours. (And maybe we’ll even get to learn who David Langr‘s David Langr is . . .)